What does “success” mean to you? 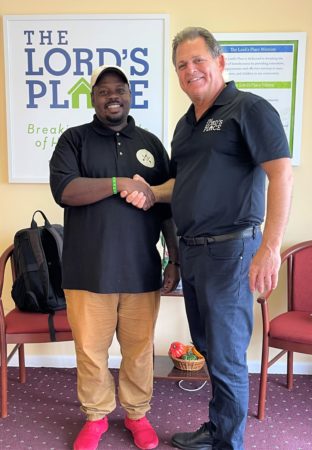 According to Alonzo, “Success has no words to define it because everyone sees it differently.  To me, it is more moral and spiritual and is defined as steadily doing the right thing.  It is not material.  You have to be careful not to set the goal too high at first, so you don’t get frustrated and give up.  It is a steady upward process.”

Alonzo’s childhood was not easy and filled with uncertainty, running from abusive situations and bouncing from one foster home and state to another while trying to work and financially support his younger siblings. Finally, all the running caught up to him; he made poor choices and ended up in prison. He knew this was not his path and vowed to put himself back on the journey he envisioned for himself. He began taking GED classes while incarcerated and passed all but the math section. He connected with The Lord’s Place with a heartfelt letter to the Reentry team, connected with the Job Ready Program, and began to put plans in motion to better his future.

When he moved to The Lord’s Place William H. Mann Place for Men, he kept his eyes on his future, completing the Job Ready Program, becoming a chef’s apprentice, and working in various jobs in the community. Each time a program and opportunity came to an end, he was ready to begin the next, soaking up all the knowledge and experience he could. He attended Palm Beach State College classes and obtained a peer advocate certificate and a forklift operator license.

Alonzo began working with The Lord’s Place tutor to complete his GED, and on August 24, 2021, he proudly held his GED Diploma. With all of the knowledge and experience he has acquired, Alonzo has a solid foundation to achieve his goals. And by his definition, Alonzo has found success.