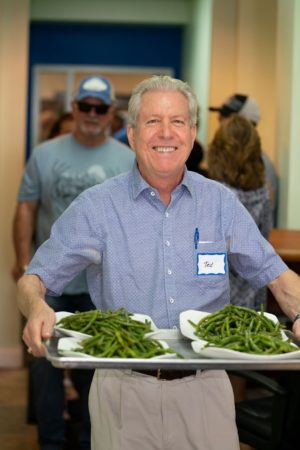 The Lord’s Place’s strong financial health and commitment to accountability and transparency have earned it a four-star rating for the 10th consecutive year from Charity Navigator and as a result has garnered long-term and increased community support.

“This exceptional designation from Charity Navigator sets The Lord’s Place apart from its peers and demonstrates its trustworthiness to the public,” according to Michael Thatcher, president and CEO of Charity Navigator, America’s largest independent charity evaluator. “Only three percent of the charities we evaluate have received at least 10 consecutive four-star evaluations, indicating that The Lord’s Place outperforms most other charities in America.”

Ted Deckert, a local attorney and board member of The Lord’s Place, has devoted his time, talents, and treasures to The Lord’s Place for more than half of his life. Deckert learned about The Lord’s Place in 1983 when founder Brother Joe Ranieri slept in a dumpster for 30 days to shed light on the plight of homelessness and raise funds for a shelter. Moved by Ranieri’s story and mission, Deckert has been actively involved as a volunteer and supporter, including service on the board of directors since its inception.

Deckert reflects, “For our humble ‘community based’ organization to be among the top three  percent to receive this designation is a credit to the dedication of our board and leadership team. This recognition continues to be a key component in our efforts to raise the funds we need to continue this important work. It is a significant resource for assuring our financial supporters that their donations will be utilized responsibly to fulfill our mission.”

Charity Navigator, using objective analysis, awards only the most fiscally responsible organizations a four-star rating. This highest possible rating indicates The Lord’s Place adheres to sector best practices and executes its mission in a financially efficient way. The Lord’s Place is part of a preeminent group of charities working to overcome the world’s most pressing challenges.

“It’s important that our donors trust that we’re using their donations wisely to transform lives by providing solutions that break the cycle of homelessness for the most vulnerable and neglected in Palm Beach County,“ said Diana Stanley, chief executive officer of The Lord’s Place. “Our four-star Charity Navigator rating demonstrates that donations are going to a financially responsible and ethical charity when supporters decide to give to our mission to end local homelessness for good.”

The Lord’s Place’s rating and other information about charitable giving are available on www.charitynavigator.org.